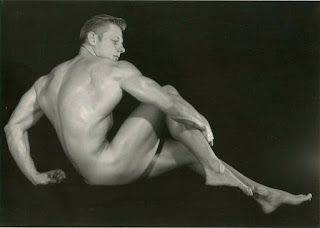 2020 certainly didn't turn out in any way that I'd expected.

As many of you know, I've been writing my second novel since July, 2016. To date, I've nearly completed writing chapters twelve and thirteen, and expect to publish the book sometime this spring or summer. According to Amazon, it's already past 700 pages in length. I've edited the story along the way, but once I've finished writing the final two chapters, I plan to spend a couple of months editing it a few times from start to finish. I spent nearly a year in total researching the real places that characters visit when they travel back in time to 1910's Manhattan and 1920's San Francisco. I greatly enjoyed researching and learning about the clothes, transportation, restaurant menus, slang, manners and mores of these two decades.

Re this blog, as some of you have pointed out, I've more than once mistaken Tom Fine as another model. It wasn't until 2017, while I was volunteering at the Bob Mizer Foundation to sort through Denny Denfield's fantastic negatives, that I was able to study a number of photographs of Tom Fine and develop a clear eye for this handsome model. In the coming days, I will update this blog so that he is correctly listed as the model posing in various posts. In the year since I've been away from the blog, Google aka Blogspot has made changes behind the scenes: I discovered yesterday that I need to download a different browser that allows me to add to the bottom of each post the searchable labels that help you quickly find the models and photographers you're interested in.

On a personal note–and as a preview of my next novella–some of you know that for many years, my hobby was weightlifting. Then, in 2008, while I was riding my bicycle in the Haight in San Francisco, I was hit by a car. In addition to several minor injuries, I sustained fractured vertebrae in my lower back and neck. The pain turned out to be chronic. Over the past twelve years, it has felt like I've had two spines fighting for dominance in my lower back. To my disappointment, I could no longer work out. In many ways, I think I started this blog as a way to feel connected to my bodybuilding days, which I had thought were forever behind me. Then, in January, 2020, I hurt my back three times over five days (by tripping sideways and grabbing my bed to stop my fall, by picking up a very heavy box and, finally, by simply lying down on my back on the floor). This pain was the worst that I'd endured since being hit by the car. Then, to my amazement, once the swelling healed, all of my back and neck pain was gone. I was cautiously optimistic, while I waited two months before joining a gym, where I started out lifting light weights. Then, after several weeks, when all was going well, I started using much heavier weights. By the end of that first week with heavy weights, gyms abruptly closed, due to the pandemic. That week, I was amazed to feel the familiar switch happening in my body, as it went in ketosis. I marvel that I can type that today is the end of week 30 of working out after 12 years. Frankly, it feels like I was granted a wish. With the gyms closed indefinitely, I bought weights for our home gym to use for my upper-body workout; and for my legs, I do laps on my bike at a difficult gear up a steep hill near the house. In the months since I've started working out again, I've been disappointed that I could find online little information re men and women weightlifting in their 50's after not exercising for a decade or more. The transformation has been an interesting process that I'd thought others would have already shared. To date, I've lost 60 pounds while I've been focused on building muscle mass. Now, I'm increasingly interested in weight loss aka getting as ripped as possible. As you might know, I stay in ketosis by exercising and by excluding carbs and sugar from my diet. I eat a lot of meat, eggs and cheese, crave water and (of all things) asparagus, and make sure to work my way through three pounds of kale a week in salads and shakes. In my novella, I'm going to fictionalize what's happened to my body as I've been working out after such a long hiatus. Most remarkably, I suppose, my testosterone level almost immediately skyrocketed, which made me short-tempered for several weeks, and which made my memory remarkably sharp. Other things happened, too, which I'll go into more detail in the novella. For the moment, I stick to a rotating, five-day, work-out schedule, and remain thrilled that I've been granted this wish.

I hope that, despite the terrible pandemic, you, too, have found a modicum of hope and happiness, and that you are looking forward to a better, healthy new year.

Don't miss out!
Check this spot on
my other blog!

Welcome to our blog dedicated to photographs of our favorite vintage beefcake photographers and models.

I produced videos for top fashion and lifestyle brands, have been screenwriting for ten years, and am pleased this blog was featured on the Sundance Channel's website.

Mike The Content Producer
Thank you for reading this blog!

I enjoy working on my blogs and contributing to others', so if you like what you see here, pass it on!

If you think you know of someone or an event that would interest me, please send me an email.

I interview Emmy and Peabody award-winning television writer/director/producer Richard Kramer in this post on my blog Mike The Content Producer.

I interview Dennis Bell of the Athletic Model Guild and Bob Mizer Foundation in this post on my blog Mike The Content Producer.

I interview popular physique model Rick Alexander aka Rich Sternberger in this post on my blog Mike The Content Producer.